DeFi : "Curve Wars", a journey to the heart of a civil war

For the past few months, DeFi protocols have been looking to take over Curve's liquidity. Understanding the workings of the "Curve Wars" is essential to grasp what is at stake in terms of governance. It is a real power struggle that is taking shape where CRV has become the sinews of war.

Curve: the most important protocol of the DeFi

Curve is an automated market maker (AMM) originally specialized in stablecoin swaps. It is the most important protocol of the DeFi Curve with nearly $20 billion of TVL

One of the reasons for the protocol's popularity is the minimal risk of impermanent loss, since the assets traded have low volatility between them. The returns are also very attractive to users. AMM's unique architecture and abundant liquidity are highly sought after on the DeFi, making Curve a must-have protocol. The best proof is that there has been no fork competing with this technology to date.

Curve V2 goes even further and allows the creation of pools between uncorrelated assets, competing with projects like Uniswap and Balancer.

The ability to create swaps with minimal slippage is particularly sought after by traders. As a reminder, slippage is the difference between the price at which the transaction is executed and the expected price. It is a source of uncertainty and a significant cost.

The CRV token rewards liquidity providers (LP) and locking for governance. Curve practices Protocol Controlled Value (PCV) to control the liquidity of the protocol. It does this by encouraging long-term locking of CRVs in exchange for veCRVs. This is a very clever trick, as it prevents capital flight.

The veCRV tokens allow voting on the distribution of CRV rewards and the addition of new gauges. On Curve, inflation is returned to the cash providers. This usage is measured by gauges. The liquidity gauge measures how much liquidity an LP brings into a pool.

Pools seek to attract the most liquidity to improve the ability to maintain the anchor. This is a critical issue, as price slippage during a swap represents a cost to users.

The most successful governance of DeFi

There are essentially three types of participants in the Curve ecosystem: traders, liquidity providers and CRV Stakers.

The veCRV governance token is locked into the protocol for up to 4 years. The longer users block these tokens, the more power they have to influence the protocol. This power will allow them to act on the weight of the gauges and thus modify the CRV rewards allocated to each pool on the protocol.

We quickly understand the interest of accumulating a maximum of governance power on Curve. By accumulating veCRVs, it is possible to maximize the return in CRVs and thus attract more liquidity to a pool (boosting). Losing this power would be equivalent to LP revenues decreasing and thus observing a shift in capital.

It is possible to increase the CRV rewards on a pool up to 2.5%, provided that the maximum amount of veCRV required is provided based on the liquidity deposited. The greater the liquidity, the greater the number of veCRVs needed to reach a multiple of 2.5.

Locking in the veCRVs is particularly clever. Whales are incentivized to stay in the Curve ecosystem since the reward is proportional to the lock-in time. On average, it amounts to 3.65 years. These actors therefore tend to work to improve the protocol.

The release of the CRV governance token was so effective that Curve's TVL increased by a factor of 3, in just 3 days.

Convex has taken over Curve's governance

A newcomer to DeFi has established itself in a few months as a must-have protocol in this ecosystem. Convex is a service that seeks to maximize the return from locking in VRCs. It is currently the largest CRV whale. Convex currently holds nearly 47% of the total veCRV supply. The protocol has risen to the 2nd largest DeFi project.

Holders of veCRV, Curve's voting token, can deposit their CRV assets on Convex and earn cvxCRV in exchange. These tokens allow users to receive CRV rewards and CVX. The cvxCRV is a traditional, liquid token that can be freely exchanged, unlike the veCRV, which is non-transferable.

Users therefore give up their governance rights on Curve and transfer them to Convex. The interest of such an operation is to obtain veCRV to maximize the return. We no longer vote on the protocol, but we get more rewards. The difference is clear, as the protocol currently offers an APY of 48%.

Convex users pool their assets so that the platform can acquire more CRVs and convert them into veCRVs, then maximize the boost for all liquidity providers on Curve.

Convex also caters to Curve's liquidity providers, as it is possible to deposit LP tokens in exchange for additional returns.

Conversely, if our primary goal is to increase voting power on Curve, it is possible to accumulate CVX and lock them in for several weeks on Convex in exchange for vlCVX. Each dollar of CVX purchased gives more voting rights on Curve than the purchase of CRV. Therefore, it may be worthwhile to acquire CVX instead of CRV if you want to vote on Curve's governance.

In the end, Convex has only one objective: to acquire as many veCRVs as possible to influence Curve's governance. And so far, it's been very successful.

The CVX money supply is limited to 100 million tokens, which will be reached when 500 million veCRVs have been locked in. Therefore, each CVX acquired will have an increasing voting right over time on the Curve protocol.

Currently, nearly 45% of the maximum supply of VRCs has been issued. 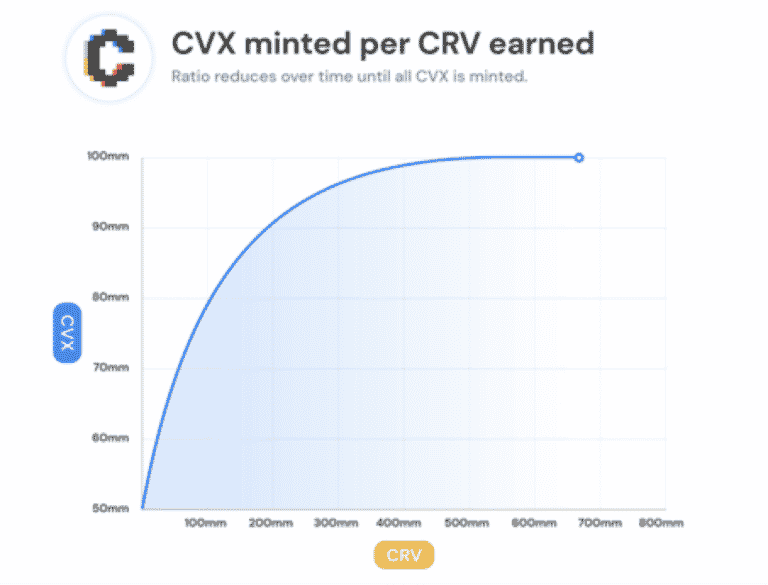 The main competitor of Convex in this CRV race is Yearn Finance. As a reminder, users deposit tokens on Yearn, which implements farming strategies to optimize returns on DeFi. The aggregator derives the majority of its performance from Curve by providing cash in exchange for CRV. Yearn therefore also seeks to accumulate as many CRVs as possible to provide depositors with the highest boost. 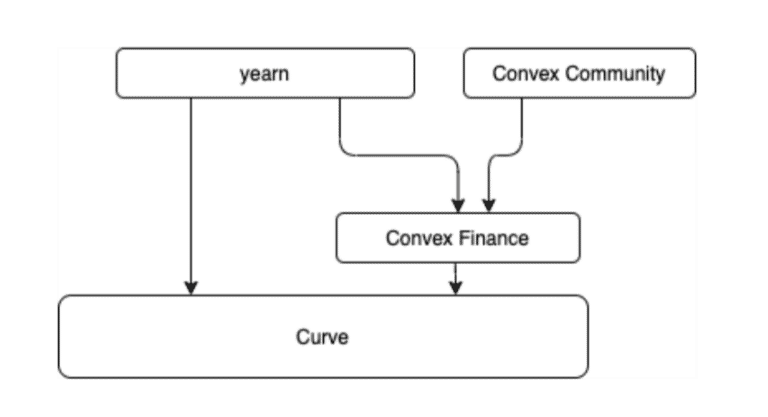 Recently, the protocol has delegated all its veCRVs to Convex in order to maximize performance.

This will increase yields of factory pools for both our DAOs. This does not affect regular pools, fees or voting.https://t.co/UDhz14fKcg pic.twitter.com/GGPMfKRzj8

Olympus Protocol DAO has also positioned itself to accumulate CVX by issuing CVX bonds. Olympus believes that Convex has immense potential and that it makes sense to get as many native tokens as possible.

The issue rate of CVX decreases over time. So acquiring the same percentage of votes on Curve will tend to be more expensive in the future.

The objective of the protocol is therefore to enjoy this voting power to increase cash returns and to capture a significant level of governance over the Curve ecosystem. Olympus therefore clearly has the potential to become a very influential player.

Badger is a bitcoin-focused DAO that has also recognized the importance of influencing Curve. There is currently nearly $3 billion in liquidity for BTC-related assets on Curve.

Prior to Badger's arrival, these BTC-related assets received less than 2% of CRV rewards. By accumulating CRVs since October, Badger can vote for higher returns on Curve for strategic cash pools. It's a method that seems to make sense since the protocol's CRV has risen nicely.

In war, all bets are off

Mochi first promoted USDM, an asset-backed stablecoin, and then encouraged liquidity providers to join a pool on Curve. Second, the protocol created $46 million in USDM artificially, since the Mochi tokens were worthless. Using these USDMs emptied DAI's USDM-3 pool. The proceeds were then used to acquire CVX tokens on Convex.

I love the sequence of events from the EOA;

All in the span of ~2 hours

I don't understand how people aren't classifying this as theft. pic.twitter.com/kbCQuPryge

The intent was clear: Mochi Inu attempted to acquire a significant position in Convex to entice liquidity providers into the USDM-3 pool. The creation of USDM without real support resulted in the loss of the peg, leading to substantial losses.

This event is more far-reaching than it appears. Why? Because Mochi was expelled by Curve's DAO for being a malicious actor. Many consider that this is actually a coordinated action by many whales. We can see the political difficulties that a decentralized protocol can encounter.

VlCV holders also vote based on snippets. Curve actually allows protocols to reward users who vote for their pool with their veCRVs.

For example, a user who has locked his CRVs and got veCRVs in exchange can allocate his votes to the Abracadabra protocol (MIM3pool), in exchange for which he will receive snippets in SPELL. The goal of the protocols is always the same: to attract liquidity through economic incentives.

It is quickly understood that the snippets can provide veCRV and thus vlCVX holders with additional returns.

Votium: building on top of Convex

The Votium protocol is an auction platform where veCRV holders can delegate their voting power. In exchange, users receive rewards issued by projects interested in that voting power. The protocol allows all holders, small or large, to value their coveted power.

This mechanism can also be done automatically and passively by Votium. The project controls a very large quantity of veCRVs, nearly 170 million at the moment.

The "Curve Wars" is a no-holds-barred battle for the ultimate power in the DeFi. Convex is undoubtedly the leader in this struggle. Many attackers have realized this and are accumulating CVX in order to acquire voting rights. Regardless of what happens next, Curve will benefit from this emulation, making it one of the most promising and robust projects in the ecosystem.

Ethereum cryptocurrency dropped below 198.29, a decline of 1%Nervous