Bitcoin (BTC): Peter Schiff predicts a nightmarish crash if the currency collapses beyond its vital supports

The flagship cryptocurrency today slipped to its lowest level in a month shortly after the release of the U.S. Federal Reserve's December meeting minutes. The Fed said it would reduce its balance sheet by $8.3 trillion in 2022 after announcing a gargantuan asset purchase program in 2020 when the COVID-19 pandemic began.

The mood in the cryptocurrency markets today is quite mixed. Bitcoin lost more than 10% of its value to trade around $42,200 after the minutes were released. The other major cryptocurrencies mirrored bitcoin's performance after the Fed's hawkish news, with ether posting losses of 11.23% on the day.

Currently, BTC is teetering near its interim support level at $42,000 and prominent gold advocate Peter Schiff says investors should exit the market immediately.

Indeed, Schiff says bitcoin will fall to $30,000 if the $42,000 level is breached, adding that a devastating drop into the $15,000 area will be next if that support line does not hold. The Europac president went on to encourage leveraged investors to sell now and pay down their underlying debt to avoid being liquidated at painfully lower prices later. 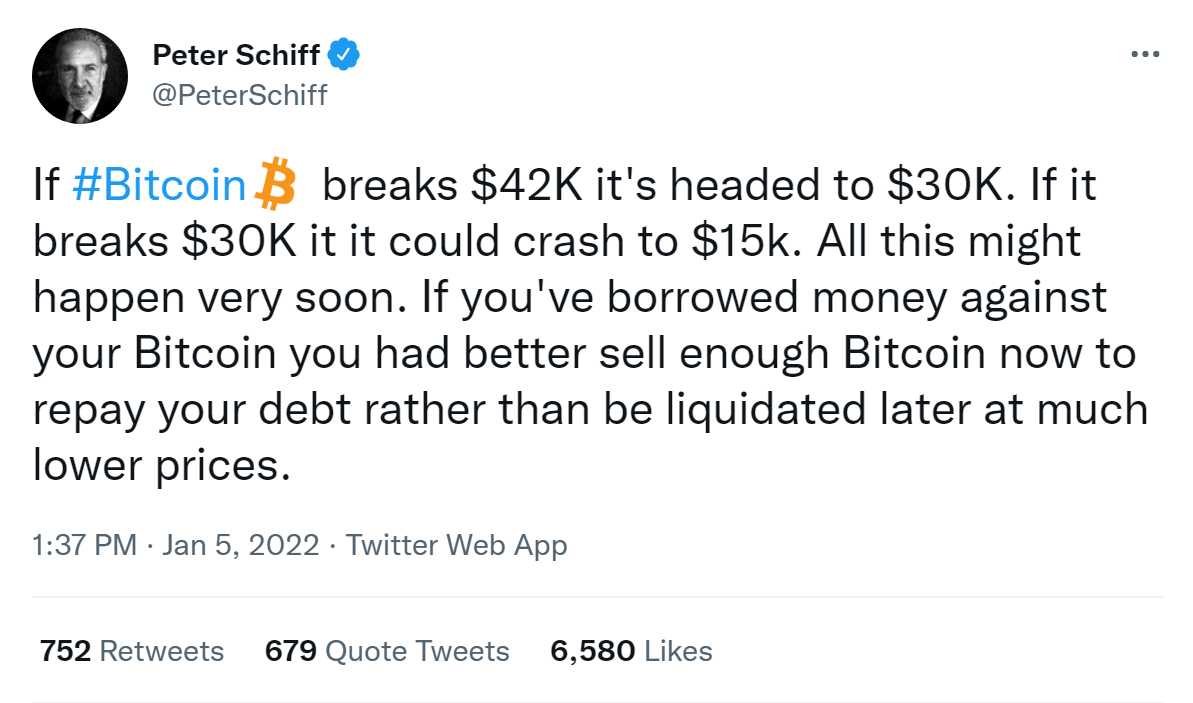 At the same time, crypto analyst CryptoWhale expects bitcoin to fall below $10,000 this year.

The analyst told its more than 402,000 subscribers on Wednesday that such a price retracement is "very obvious" once people realize that the current bubble is supported by fake money and fraud. "Bitcoin has very little demand. Only people who are buying are late-night individuals who are giving in to FOMO (Fear of missing out) after Tether's pump. This will end very soon," CryptoWhale concluded.

It is worth mentioning that the analyst predicts levels below $10,000 since October last year.

Where is the market headed?

The market is currently in a bad place and although bitcoin has fallen to its lowest level in a month, it is still down less than 40% from its all-time high in November. If cryptocurrencies continue to experience headwinds from bearish news, an appropriate bottom could take longer to establish in such a low price range.

Other market experts, such as FTX exchange CEO Sam Bankman-Fried, suggest that it is wise to build during a bear market because "low today does not mean low tomorrow."

Gold tycoon Peter Schiff reacted to the release of the minutes from the December meeting of the U.S. Federal Reserve. The notorious bitcoin skeptic claimed that BTC was set for a feverish fall if it broke its critical support. Now, Schiff is warning investors to be careful and sell before it's too late. P.S Peter Schiff  was never right with his BTC predictions. He is known BTC hater due to the fact that he is all in GOLD which is loosing value every signe day.